Thanks very much for making Grav available on Cloudron!

I've been testing the initial release, and all looks to be working so far except with the Git Sync plugin. The Plugin installs and performs the first sync to a Git repo as expected. However, after that when I try to sync a change from the Repo (either via Webhook or manual sync) there is what seems to be a permissions-related error: 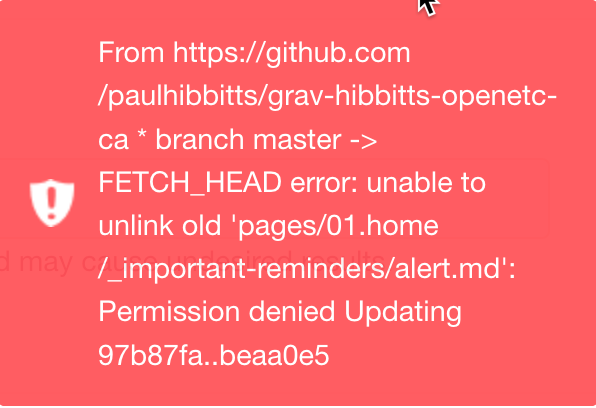 The webhook delivery was reported as a '500', and then when I tried to manually sync from Grav I got the above error in the Admin Panel. I should also mention I used Console to install a new theme with demo content.

I've tested the same setup with the LAMP setup and manually installing Grav, and there the Git Sync plugin can perform a sync when a change was done to the repo.

Any thoughts? Happy to provide additional info or do more testing etc.

Thanks very much, Paul

UPDATE: I've done more testing, a base Grav app install works fine. It seems to be related to using the Cloudron Console to install a new theme WITH demo content. Doing so then triggers the Git Sync error AND even a simple Save in the Grav Admin triggers a similar error:

To replicate this situation, do the following:

At this point try to edit/save a Grav page in Admin and an error should be triggered. Same for trying a Git Sync push from repo.